(May 7, 2014) The City of Hartford has been selected as the kick off site for “Raise The Caliber” a national advocacy campaign to end illegal gun violence. Central to the campaign will be the unveiling of a public art piece by internationally renowned artist Michael Kalish. The work, a 60-foot high sculpture created from 2,000lbs of shredded illegal guns bought off the streets through voluntary gun buybacks, will be unveiled in Hartford in July and stay for nine months.

“In cities across the country, gun violence is impacting too many families, and cutting too many lives short. We’re doing everything possible to combat that in Hartford and we welcome anyone willing to stand alongside us to help raise awareness of this issue that affects everyone in our community,” said Hartford Mayor Pedro Segarra.

“This monument is truly the most powerful piece I have ever created and I am really honored to hear about Hartford’s enthusiasm for it,” said artist Michael Kalish.

Raise The Caliber was founded by CEO of Jewelry for a Cause NYC, Jessica

“I am humbled and inspired every day by the outpouring of support that we’ve received from people around the world who are sick and tired of the devastation created by the illegal use of guns,” said Jessica Mindich, CEO and founder of Jewelry for a Cause and the Raise The Caliber campaign. “On behalf of all the great people and conscientious brands behind the Raise The Caliber campaign, we deeply appreciate the welcome and support we’ve received from Mayor Segarra, Police Chief Rovella and the citizens of this great American city. I grew up in Hartford, my father has always worked downtown and both of my parents are very involved in this community. I am honored to be working with all of you to help make illegal gun violence in Connecticut’s Capital a thing of the past.”

“Having spent my career in Connecticut law enforcement, I have seen firsthand the devastating effect illegal gun violence has on individuals, families and communities,” said Charlie Grady, retired Police Detective and FBI Task Force Agent. “Jewelry for a Cause has created an inspiring and effective platform that provides a way for communities, concerned citizens and socially responsible brands to join forces and make our streets safer.”

Jewelry for a Cause partners with cities to fund local gun buyback programs through The Caliber Collection, a series of bracelets and cufflinks engraved forged from illegal guns and shell casings. Joseph Jeup and Tibi support the campaign through a Raise The Caliber-branded lighting collection and t- shirts, respectively. Mr. Kalish will create limited edition, small-scale, versions of his sculpture, and the proceeds from all branded pieces will be used to fund public safety initiatives designed to reduce illegal gun violence nationwide.

For more information about Raise The Caliber or to purchase pieces from The Caliber Collection, please visit jewelryforacause.net. 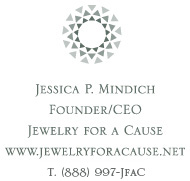